Wall Street Journal
By Gautam Naik
The probe that landed on the surface of a comet has discovered organic molecules, the most rudimentary building blocks of life, according to the German agency involved in the mission. 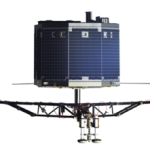 An instrument aboard the Philae lander detected the molecules after “sniffing” the comet’s atmosphere. An organic compound is one whose molecules contain the carbon atom, the basis of life on earth.

Scientists are analyzing the data to see whether the organic compounds detected by Philae are simple ones—such as methane and methanol—or a more complex species such as amino acids, the building blocks for proteins. A drill on Philae also obtained some material from the comet’s hard surface, but data about organic molecules from that experiment have yet to be fully analyzed.

Comets contain some of the most pristine materials in the solar system, dating to about 4.5 billion years ago. Previous studies have suggested that comets forge organic material in their dusty atmospheres.

Interstellar grains seen by the Cassini spacecraft lend support to the old panspermia hypothesis. By Dirk Schulze-Makuch airspacemag.com April 21, 2016 After […]

A new family of extraterrestrial particles, probably of cometary origin, were discovered this spring by researchers from the Center for Nuclear Spectrometry […]

We're collecting news articles about scientific evidence that some life on Earth has extraterrestrial origins. Big-eyed aliens, lizard people? No.

Panspermia (Greek: πανσπερμία from πᾶς/πᾶν (pas/pan) "all" and σπέρμα (sperma) "seed") is the hypothesis that life exists throughout the Universe, distributed by meteoroids, asteroids, and planetoids.